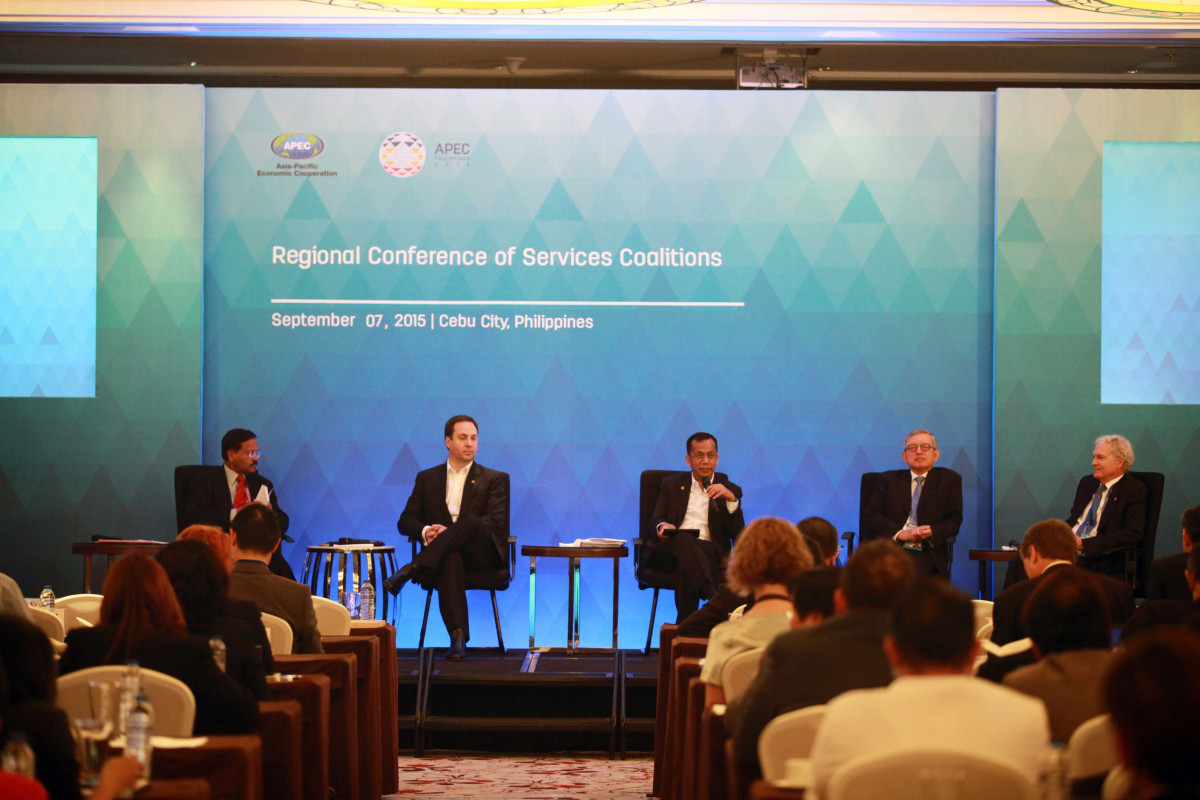 What is the APSCo?
The Asia-Pacific Services Coalition (APSCo) is the world’s largest coalition of services industries. Formed in 2015, it is composed of major business associations from the Asia-Pacific region dedicated to promoting the importance of the services sector. The collective goal is to work with businesses and governments to foster growth and efficiency in the services sectors through increased trade and investment, greater innovation and skills development, and pro-growth regulation in all Asia-Pacific Economic Cooperation (APEC) economies.

APSCo Mission
As set out in its Memorandum of Understanding, the APSC was established to:

APSCo History: When and How was APSCo formed?
With support from the APEC Business Advisory Council (ABAC), the International Trade Centre (ITC), the Australian Department of Foreign Affairs and Trade (DFAT) and the Pacific Economic Cooperation Council (PECC), the APSCo was launched on 7 Sept 2015 at a Regional Conference of Services Coalitions: “Charting a New Course on Services – a call to action in APEC”, in Cebu, The Philippines, in the margins of the APEC Structural Reform Ministers Meeting. 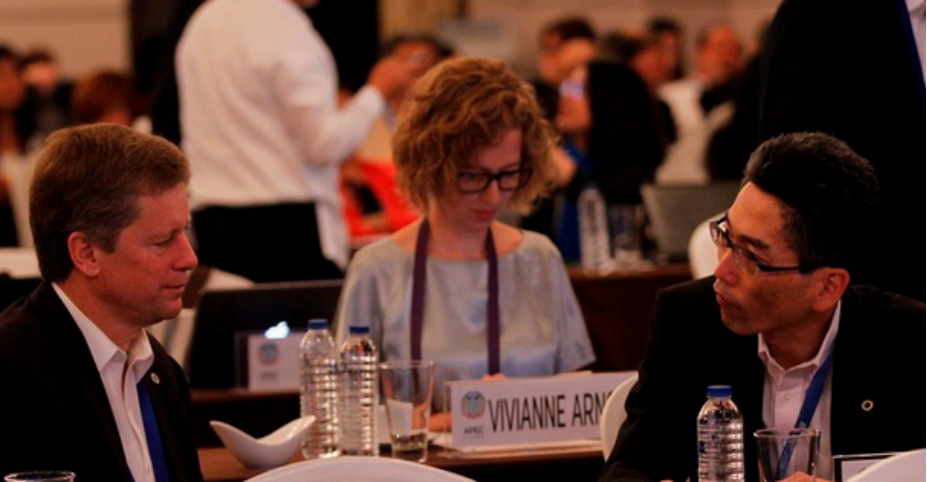 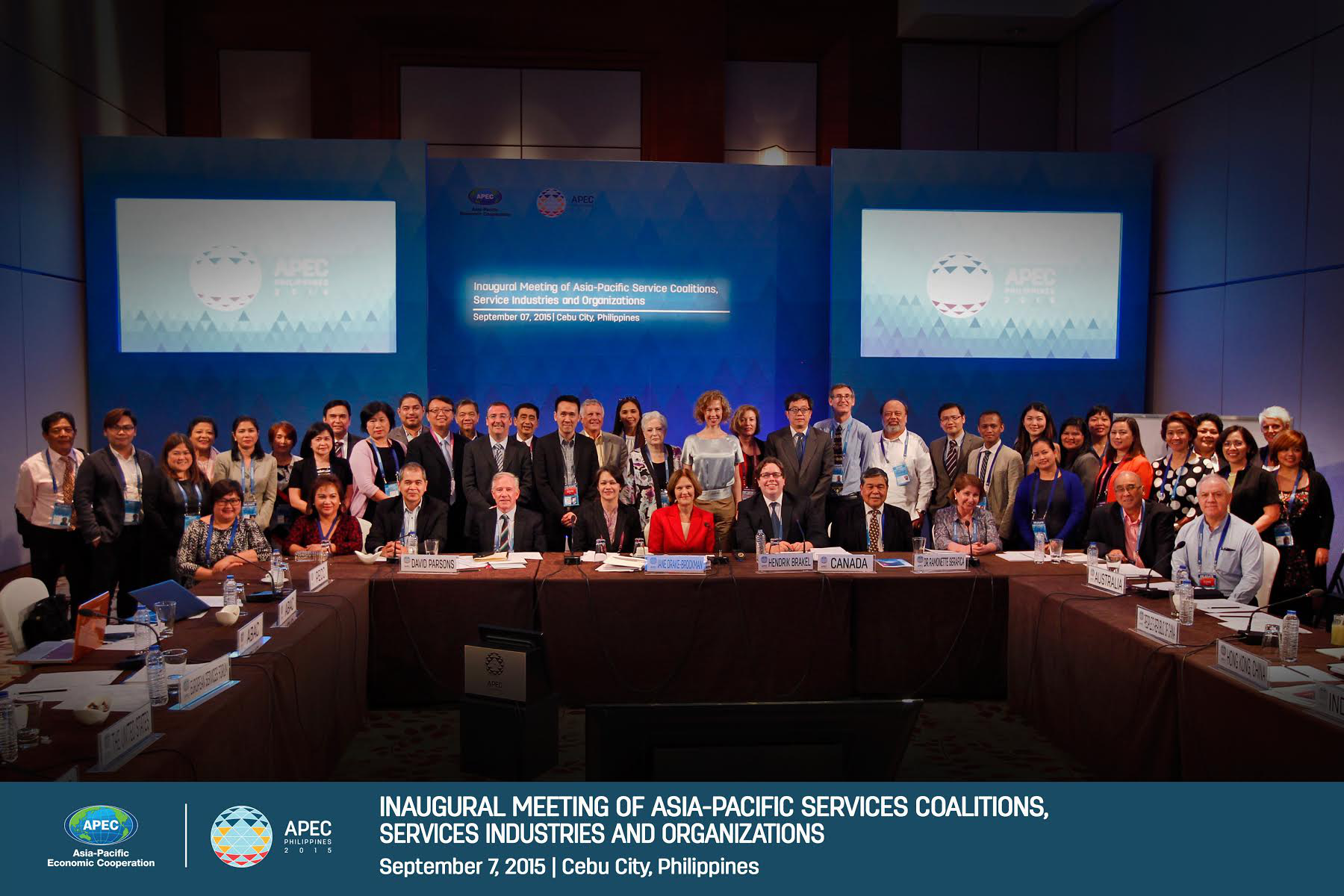 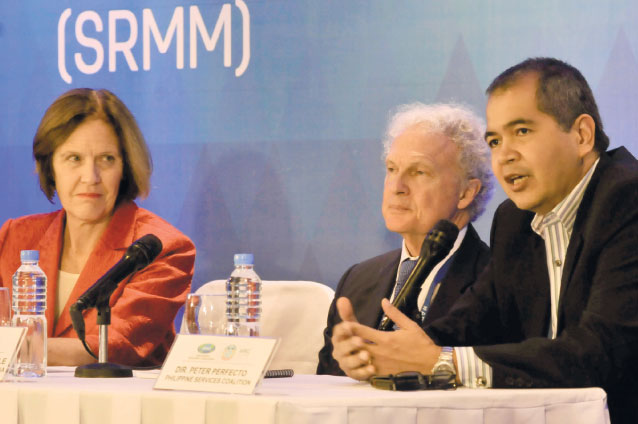 The ASR Media Release announcing the launch of the Asia Pacific Services Roundtable in September 2015 is available at http://australianservicesroundtable.com.au/wp-content/uploads/2015/09/ASR-Media-Release-Coalition-of-Services-Organisations-FINAL.pdf

Many Coalition members have backgrounders on their websites.   A description of the first meeting in Cebu in 2015 can be found at  http://isd-indonesia.org/asia-pacific-services-coalition-formed-to-push-services-agenda/.   For media coverage in the Philippines in 2015, see for example http://foundersguide.com/apec-services-coalition-launched/ 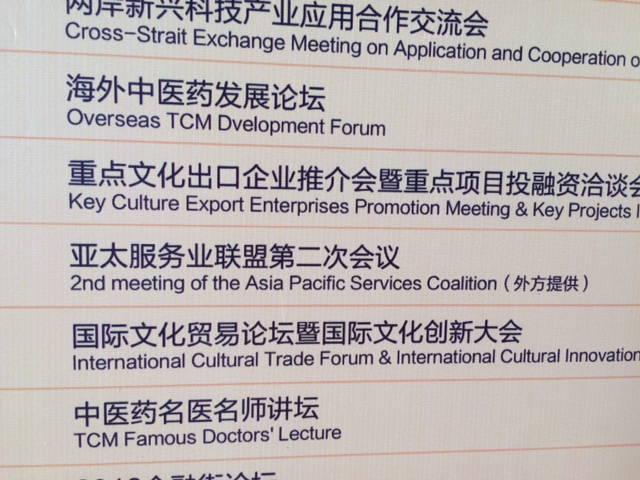 Minutes of the second APSC meeting in Beijing in May 2016 can be found at https://servicescoalition.org/images/APEC/APSC_Notes_2016-01.pdf 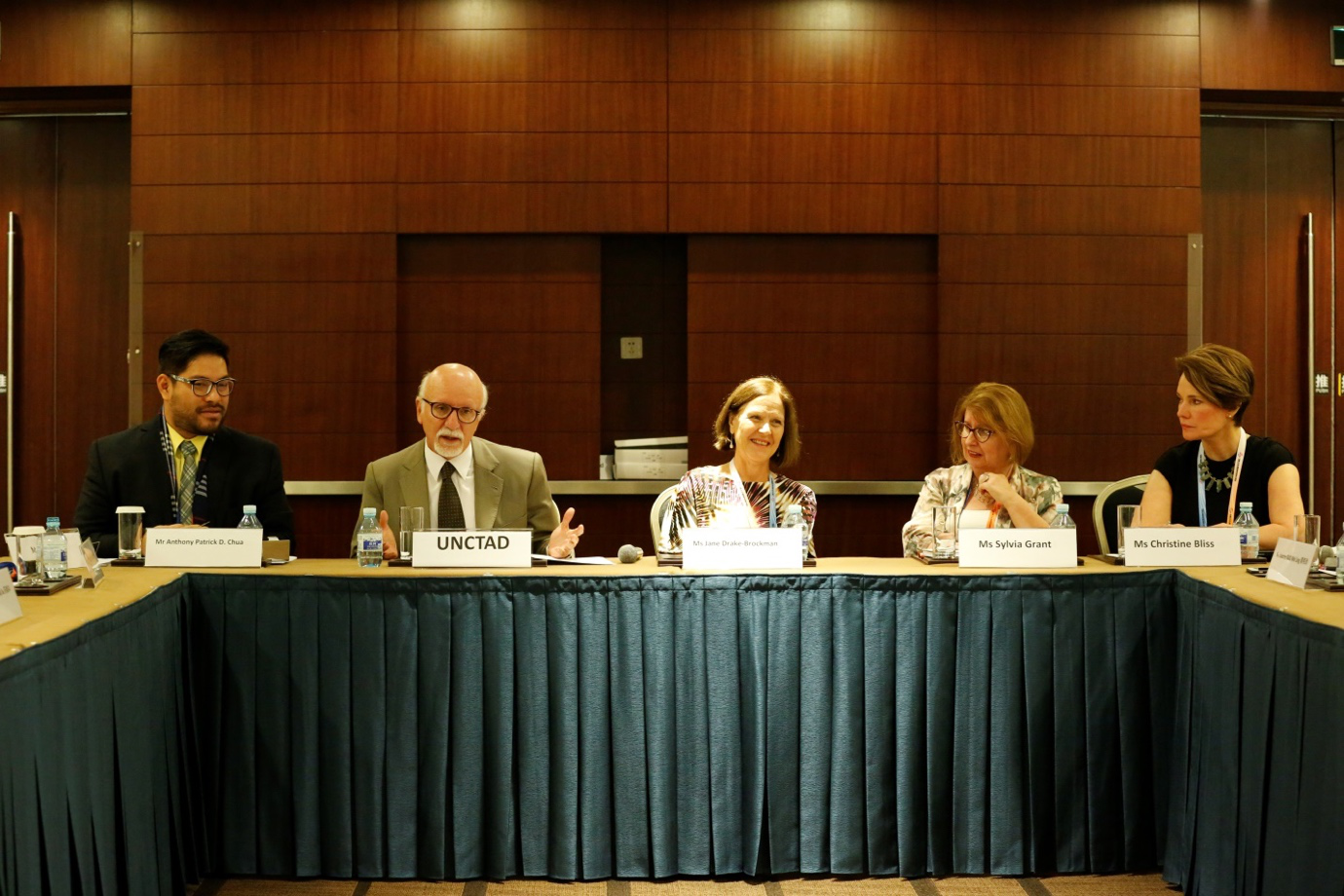 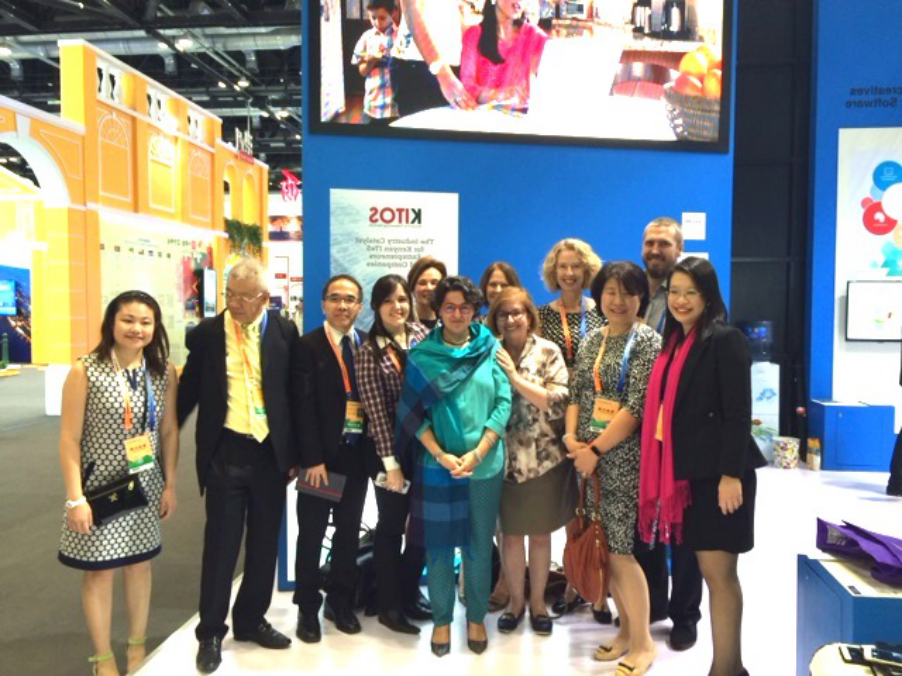 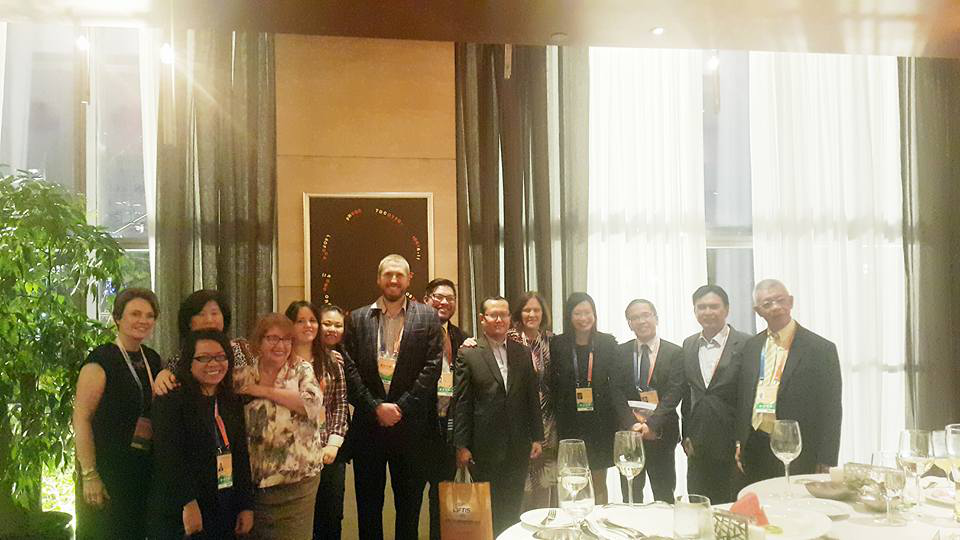 ASR took a lead throughout this period, in advocating (especially through ABAC and PECC) for regional services stakeholders to call jointly for a big new services initiative in APEC.  ASR Directors and members became frequent speakers at APEC meetings, successfully calling for initiation of APEC Public-Private Dialogues (PPDs) on Services, the first of which was formally hosted by the Indonesian Services Dialogue (ISD) in Surabaya in 2013.    ASR was invited to participate in Surabaya and in subsequent high-level APEC PPDs in Chinese Taipei; in Kazan and Moscow, Russia; in Beijing and Qingdao, China; in Clark Free Zone, Borocay and Manila in The Philippines; in Arequippa and Lima in Peru and in Hanoi, Vietnam.

As these various consultations delivered increasing political level support, ASR was among the first, along with ABAC Champions from Hong Kong (China), New Zealand, Indonesia and The Philippines, to call for regional stakeholders to come forward in a formal business coalition.

ASR lobbying efforts, along with those of other players such as ISD, culminated in an ITC-funded regional mapping exercise for ABAC which identified and connected the services coalitions in the region with each other. The then ASR CEO contributed a case study on ASR and the report was tabled by ABAC at the APEC Leaders Meeting in Beijing in late 2014. See http://www.intracen.org/uploadedFiles/intracenorg/Content/Publications/Mobilizing%20business%20for%20new%20APEC%20Services%20agenda_04Nov-FIN.pdf

By 2015, the time was right for ASR and ISD to work closely behind the scenes with the Philippine Services Coalition (PSC) to push for big new services initiatives in APEC. ASR members and PSC members had a major hand in the conceptual development and drafting of the APEC Services Competitiveness Framework which was adopted by APEC Leaders in Manila 2015.  Establishment of the Asia Pacific Services Coalition cemented an ongoing collaborative APEC services stakeholder consultation process.   ASR took a lead in raising funding to assist, especially smaller or more remote, business associations to participate in APSC.

The APSC is co-convened by the Australian Services Roundtable (Jane Drake-Brockman) and the US Coalition of Services Industries (Christine Bliss), with support from the Philippine Services Coalition (Patrick Chua) and the Lima Chamber of Commerce (Sylvia Grant).

The text of both above documents is reflective of ASR policy priorities as set out in numerous ASR policy submissions over the 2000s as well as the ASR flagship publication “The New Economic Challenge: Responding to the Rise of Services in the Australian Economy” launched by the then Australian Minister for Trade at the ASR Services Summit in October 2010. http://www.tda.edu.au/resources/New%20Economic%20Challenge%20-%20Responding%20to%20the%20Rise%20of%20Services%20in%20the%20Australian%20Economy.pdf

APSCo’s role in APEC
Following adoption of the APEC Services Competitiveness Framework in Manila in 2015, the APSCo  worked closely with APEC Senior Officials office in Lima throughout 2016, to input business perspectives on business-relevant content for an APEC Services Competitiveness Roadmap. The APSCo is specifically mentioned in the APEC Leaders Declaration of 2016;
“We commend the key role that business organizations have played in the development of the Roadmap, particularly the APEC Business Advisory Council and the Asia-Pacific Services Coalition.  We agree that such organizations should be engaged in implementation and monitoring progress of the Roadmap.”

The Roadmap sets out concrete actions and mutually agreed targets to facilitate services trade and investment and enhance the competitiveness of the services sector across APEC economies.

The 2016 APEC Leaders Statement specifically confers on APSC an ongoing role in the monitoring and evaluation of these targets.
“The views of PECC, ABAC, the Asia-Pacific Services Coalition and other private sector entities will be invited in monitoring and evaluating progress under the Roadmap. Such input will be sought on a regular basis with these entities being invited to evaluate how well targets have been met at both an APEC and individual economy level as well as to make recommendations on how implementation activities under the Roadmap might be improved.”
http://apec.org/Meeting-Papers/Leaders-Declarations/2016/2016_aelm/2016_Annex-B