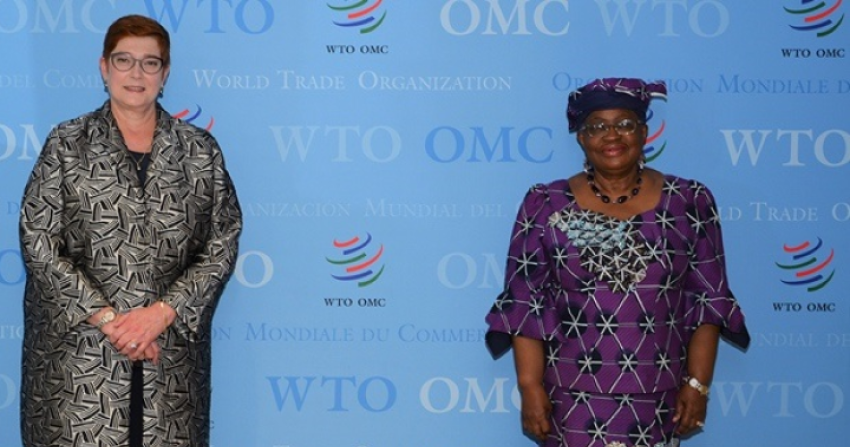 The Australian Services Roundtable joined 12 other Service Industry Groupings in a joint statement on WTO priorities, released at the Global Services Summit in Washington D.C. on 24 June.

The full statement can also be downloaded here.

Jane Drake-Brockman, the Australian Services Roundtable Director, participated in Panel Three on Day Two of the summit. Read the summary of Day Two in full below.

In her remarks about the importance of the services sectors in the global economy, the DG explained that services trade can create jobs, raise living standards, and address consumer needs. Ngozi also called for a secure digital trade environment. The DG pointed out that lesser developed economies have experienced the largest decline in services trade and noted an urgency to restoring services exports in lesser developed countries. Dr. Ngozi outlined three concrete deliverables for the next Ministerial MC12: an agreement to curb harmful fisheries subsidies, agriculture outcomes with a focus on food security, and a framework to better equip the WTO to support efforts to end the pandemic. Dr. Ngozi also acknowledged a need to address dispute settlement and expressed hope that by the next Ministerial WTO members could reach an understanding on the reforms they would like to see. Notably, the DG also said that the moratorium on electronic customs duties has been “helpful in securing a good digital environment for the transfer of digital goods.” Noting the substantial work that lies ahead for the WTO, Ngozi cited the ongoing work on domestic regulations, extension of the e-commerce moratorium, investment facilitation, women’s economic empowerment, the growth of small and medium enterprises, and environmental issues such as the regulation of plastics pollution.

At a panel featuring representatives from the WTO JSI on E-commerce Co-convenors (Australia, Singapore, and Japan), WTO Deputy Director-General Angela Ellard said the past year’s covid pandemic has highlighted the importance of services: “E-commerce and digital trade have been even more important for business and consumers in times of crisis and as a [means] for recovery.” At the WTO, Australian Ambassador George Mina said the “negotiating energy” for an e-commerce agreement is “quite extraordinary” and predicted that “we will make substantial strides forward in the next few months,” even if there is not time to reach a conclusion by the 12th trade ministerial later this year. In contrast, there is hope for a deal on services domestic regulation by MC12, he added. Singaporean Ambassador to the WTO Hung Seng Tan said the WTO e-commerce co-convenors’ goals include identifying the tough issues that will require senior political negotiation. Chief among these is how much room to allow for public policy exemptions on rules to enable cross-border data flows. Japan’s Deputy permanent representative to the WTO Katsuro Nagai said an agreement that sets rules on digital trade would help “show the WTO is relevant to the 21st century.”

3. Private Sector Perspectives on the Outlook for the WTO’s JSI on E-Commerce and November Ministerial

A WTO agreement on services domestic regulation – which hopefully will be reached by MC12 — would help enshrine principles that are essential to improving the business environment for services, said the European Services Forum’s Pascal Kerneis. These include common sense ideas that are already practiced in a number of countries, such as promoting transparency, providing information about regulatory requirements in English, and allowing for comment periods. John Cooke of TheCityUK emphasized the value of making permanent the WTO moratorium on e-commerce duties, dispensing with the long-time practice of extending a temporary ban on duties in two-year increments. Jane Drake-Brockman of the Australian Services Roundtable likewise underscored the importance of a ban on import duties on e- commerce transmissions. “A nondiscriminatory sales tax is one thing, but a discriminatory border tariff is another,” she said. Drake-Brockman added that a permanent moratorium on e-commerce duties is essential for any eventual WTO e-commerce deal to be considered credible by the business community.

On 24 June, the Australian Services Roundtable joined a multi-stakeholder association letter to G20 governments in advance of the 5 August G20 Digital Economy Ministerial.

The full statement can also be downloaded here.